I survived! January felt really long. This was mostly because the pay cycle was about 6 weeks long. Why, oh why, do we get paid before Christmas? It’s the end now and I got to do the very exciting task of reviewing how this first month of the year went. I initially thought I’d be doing the Uber Frugal Month challenge but then when I started looking at 2017’s budget – more on that in my next post – I figured that I had set some unrealistic targets for last year and wanted to use January as a template for what I really want my 2018 spending to look like. Let’s see how that went 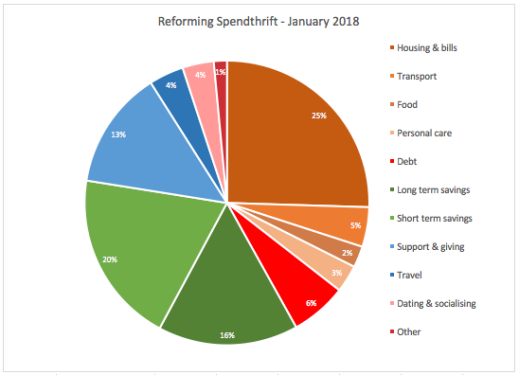 There were a lot of good things about January.

Wrap up and goal review

There’s usually an ugly side of my spending reviews so I’m awfully chuffed that I’ve bucked the trend for the first time in the 18 months I’ve been tracking my spending. I set my 2018 goals with a focus on forming habits and tackling 12 focused challenges through the year. January’s challenge was Drynuary. Killed it! I had my first drink of 2018 yesterday when my company celebrated a successful move into a new building.

The other things that I will be focusing on through the year were:

February’s challenge is giving up bread (including things like pastry and pizza but excluding cake) as well as pasta (including some kinds of noodles). I figured that if I wanted to keep my fitness progress going at the same level as in January, I needed to give up something as equally helpful as the alcohol. When I eat pasta and bread I feel like I also eat a lot more dairy so this should have a positive impact overall.

There we have it. I had a great January. How was yours?