I was torn between reviewing August and reviewing how frugal my recent Berlin trip was. The August review won because I really need to get a handle on my spending for the rest of the year. This month was super important for two reasons. Firstly, it’s been a year since I started tracking my spending and trying to control my money. Secondly, I was able to make a decision (since I now have savings) to go home to see my ill dad albeit for only 3 days. How did August go? 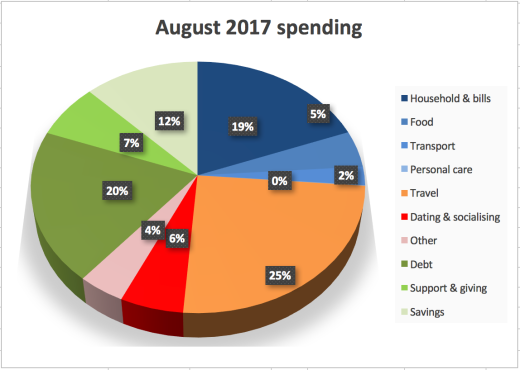 Income: I got a full refund of my deposit after weeks of slow responses from the estate agents. We were thorough about the check-out inventory and ensuring the house was well maintained so this wasn’t too surprising.

Debt: I was able to pay off one personal debt and dedicate nearly £1,000 towards debt for the first time since January. I’m a long way off my goal for the year but hopefully over the next 3 months I’ll be able to pay off around £3,000 more.

Travel: Yes, I spent a lot of money on this category but that wasn’t a bad thing. I managed, using Google Flights, to snag flights for an emergency trip home. I avoided paying a £1,500 fare (British Airways) and got upgraded to business class on my way back consequently. I also got to see P!nk play (and spend a significant amount of quality time with good friends) at the V-festival, an experience that was totally worth the £150 that I budgeted and spent on it. Plus, I booked 2 sets of flights to Scotland for a very reasonable £40ish each.

Food: I got takeaway (in some form – coffee & cake, burgers, etc) 15 times last month. Considering I’d spent £90 to get some food catered, that’s poor form. I also get free coffee at work and there’s usually sweet treats lying about most days so I really have no business doing this so much.

Socialising: On Tuesday night I went out with mates after football and didn’t get home till after midnight. I spent £6.50 and that was on entry fees as well as cloakroom use. On Sunday the 27th, however, I spent £58.35 for entry, cloakroom use and 3 rounds of drinks at a party. This is a ridiculous amount to spend on one night, especially when I am still in debt and struggling to meet the goal that I set for this year.  I need to keep socialising down at the level of Tuesday’s spend. I managed to keep that evening sensible because I didn’t drink anything but water. Since I can’t stop buying rounds, I really need to stop drinking unless I’m socialising at home.

Networking: In a similar vein, I went out to network with colleagues and unknown women /non-binary humans in tech and spent a similar amount (£57) on a single night out. Maintaining visibility is important to me but I need to stick to the £78 allocated to this category a month. August’s spend was £40 more expensive than intended.

My savings rate in August was 33% – probably the poorest I’ve had all year. This was affected mainly by the £1,050ish I spent to see my dad and family. I spoke with my mum at length about how great it was that I’ve been able to support them through what’s proving to be a rather difficult year. A year ago, I would have been unable to visit and I probably wouldn’t have been able to help either. This has been a practical demonstration of how important it is that I continue to strive for frugality. The better I become at it, the better I become at joyful spending.

I’d rate August very highly (9 out of 10) for how much joy I got from spending so much.