This is a rather shamefaced blog post. It’s over halfway through December and I’ve only just got round to doing my spending review for last month. I’ve also been very bad at documenting my daily spending, keeping track of my discretionary spending envelopes and have generally been behaving rather badly the last few weeks. I’d like to blame it on the festive season but I know it isn’t really that. I think that I’ve got a little bit too caught up in today, instant gratification and the a little less bothered by the things that should matter i.e. paying off debt and saving toward the lifestyle that I [think I] want to live. Here’s the dirty on November. 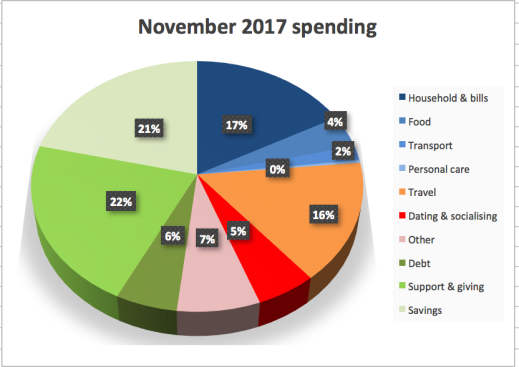 Support: This is a mixed bag. I gifted my parents over a £1,000 towards a party they threw to celebrate my dad surviving 2 surgeries in 2017. I didn’t budget this much but when it turned out that they had bitten off a bit more than they could chew with the event, I was thankful that I could offer them a bit more. I have a concern that my parents are even more financially irresponsible than I am. This worries me, because I feel a sense of duty and obligation that might result in my funnelling money to them instead of towards my goals.

Transport:  I spent just over a week in Portugal and Spain at the start of the month and this appears to have had a positive impact on my transport costs in November. I also remember making conscious decisions to walk instead of taking the bus to and/or from the tube station – thus saving 80p off the maximum cost of a transport on a few days through the month.

Personal care: I’m using up lots of toiletries that I’ve had for months or years. This is always a positive. I had to buy painkillers for cramps as well as new deodorant but even with these, I was still nearly 60% under budget for the month. Win!

Food: At £129.42, this is my third lowest spend for this category in 2017. Obviously food consumed while I’m travelling comes out of my travel spending so that had a knock-on effect on this category. I also dated and socialised egregiously which usually means that I’m not eating that much on my own. If this had come in under the £90 mark I would have been more pleased about it.

Travel: I spent £770.70 on travel for the month. Some of that was pre-paying for the trip I made to see the Christmas market in December as well as paying back my friend for accommodation and my final meal from the Scottish Trossachs trip in October.  However, majority of it was spending during the busiest time in Lisbon. I went for a conference with a colleague and so couldn’t travel as frugally as I aim for these days. I had to pay out £207.03 that was not reimbursed, or £430.41 in total. I also appended 2 quick visits to Porto and Madrid because that’s how I roll. Things I’m not too proud of include being too embarrassed to take my egg sandwiches to the conference with me, eating more than one meal while I was at the conference and spending far too much money on food and drink for the few hours I was in Madrid.

Dating: After a few months not dating at all, I really took the piss in November. I spent a ridiculous £218.36 on this category. I went to breakfast, bought lots of drinks, had dinner out a number of times and went to the cinema too. I didn’t plan frugal dates and I was far too generous. I’ll need to rein this in MASSIVELY by January.

Socialising: Alas, one of my key problems this year has been keeping socialising frugal. I’ll obviously have to adjust my budget up for 2018 instead of fooling myself that I can spend £108.33 on this category on average. Admittedly, at £148.39 only July and April have had lower spends. However, it is just unacceptable to exceed the budget in this category particularly when I’ve attributed other spending to “professional networking”, travelled and dated as well.

Another month, another fail. December will be equally disastrous. Yet, I cannot give up. I’ll evaluate all of 2017. Possibly create a different budget. With different spending plans. I will need a manifesto. A commitment to doing better. A plan to be less mediocre in the execution of my plans. A way to motivate myself to make more frugal decisions. Otherwise, I really should create a FI/ER plan that reflects my actual spending – £2,518.99 instead of the £1,500 that I tell myself I can achieve.