Work has been busy or my time management has been very poor over the last couple of weeks. I think it’s more the latter. This is the first morning that I’ve woken up feeling rested and the first time I’ve had a bit of time to relax and do important stuff this week. I won’t lie, I’m very excited about some of July’s numbers so let’s get into those. 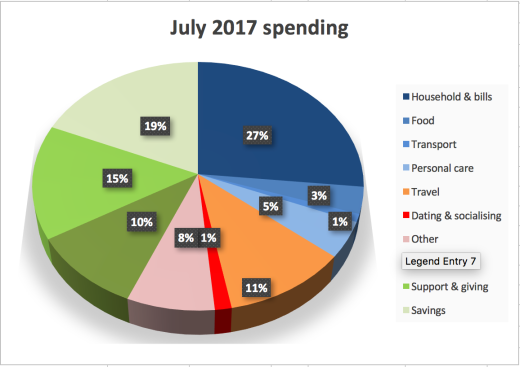 Dating and socialising: Wow! This is my headline act for the month. From January to June, I struggled to rein in this category – spending a whopping 9% of my salary on two things that have no business headlining my expenditure (negatively). When I looked at my July spend and saw that I’d spent around £50 on them, I was just thrilled. I split up with my person of interest and I also spent 9/10 days away so some socialising costs were absorbed by that budget. Still, I’m proud of this achievement.

Transport: This was another win for me. I cycled for a significant portion of the time I was in London including days where I spent over 2 hours cycling to work, football and back in one day. If I don’t cycle at all, I spend around £140 on transport. With being away and cycling loads, I spent only £34 on this category.

Food: You don’t need to read many of my posts to realise how much I like food and how the struggle is real with trying to avoid dining out and takeaway. The last couple of months, I realised that trying to take lunches that I wasn’t excited about or have meals at home that I didn’t care for proved more harmful that useful. It’s a lot easier to turn down an invitation to lunch out with my colleagues when I don’t have a boring grocery store soup as my alternative. I’ve shelled out £90-100 at the start of the month on a caterer making a stew that I love but neither have the time nor patience to make well. I then eat it with pasta or rice through the month – works out at around 25-35 meals. In this way, I managed to keep food spend in July down to a wonderful £116.88.

Travel: I went to two countries over 9 days and spent less money on this trip than I’ve spent on 3 day trips to one city in the past. I also bought tickets for my trip to Berlin yet my total spend came in at £375.93. Uh-mazing!

Other: I lumped in professional expenses (‘mandatory’ work events, tools for the job etc), short-term ‘loans’ to friends and miscellaneous spending together. One day at badminton, there weren’t enough parking spaces so I had to leave my bike locked to a rack with 2 other bicycles.On leaving, it turned out I had a flat tyre. I assumed I’d got a puncture and took it to the cycle shop to get a new inner tube. The mechanic said he didn’t find evidence of a puncture in my (puncture resistant) tyres so I’m pretty sure some petty idiot let out the air from my tyres costing me an unnecessary £10.99. I also forgot to cancel a subscription for a tool I’d only needed for a month and this cost me £24.30.

Personal care: I got Sennheiser headphones (which sound lush and were on sale) for £55 as well as lots of clothing – 3 t-shirts (€15) and lush Vans black hightops that I’ve been lusting after since Boxing day. They happened to be 30% off and in Euros so I got them for €69.95. Sure, they were all on sale and excellent value but they were out of budget and I had to dip into savings for them which is why I’ve put them in this column. I didn’t really make a sensible clothing budget for the year so really need to think about how I handle these in the future.

Debt repayment continues to be pitiful. I budgeted for an average of £1066.67 a month to be paid out on debt and have stayed well below that amount at £343.40. Even worse, I still owe friends substantial amounts of money and I felt really bad about frolicking on a trip when I have these amounts outstanding. Sure, I side-hustled my way to having the budget for the trip but I really need to prioritise paying off debt for the next year or so.

I already know that August will be a financial disaster (because I’ve already spent money this week and it’s not been pretty). I haven’t spent intentionally or used my time wisely lately. I’m inefficient at work, spreading myself very thinly, and doing too much in my spare time. I can’t seem to stay the course with spending cheaply or eating better or losing weight so August’s goals are simple.

One thought on “July Spending Review | Getting discretionary spending in hand. Woo!”