I know, I know. We’re nearly a third of the way through July and I’ve only just got round to figuring out how much I spent in June. This should have been a half-year review too but I’m doing this at an airport because I was too cheap to pay for a night at an Airbnb following a post-midnight arrival. I don’t know how terrible this decision will prove to be but although sleeping on airport benches is proving not to be my thing, it turns out that early morning calculation isn’t either! 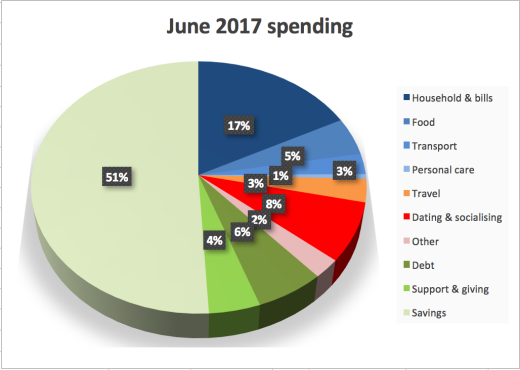 Savings: Oh my days! I believe that’s the first time I’ve saved over 50%! If we include support and debt like I have in previous months, then I’m over 60%. Absolutely awesome. I should be absolutely transparent and highlight that a good chunk of that is money that I put down for one of my housemates and I for our deposit and relies on a full return of the deposit from our old place to remain intact. I’m pretty confident that I’ll get most of that back though so I shall dance a wee jig as soon as this is posted. There’s also £300 that I’ve lent to my girlfriend. Fingers crossed I get all of that back in August like she promised.

Personal care: I’ve been using a lot less body lotion now that it’s warm enough for my skin not to get dried out as soon as it gets hit by water. I’ve also held out on buying daily hay fever meds and only take one when my symptoms exceed sneezing and a runny nose – currently not very often (touch wood!)

Support and giving: While I gave a little to my girlfriend and have been supporting her through a bit of a broke phase, this was the first month in a while that this category wasn’t in 4 digits

Income: I sold something on Shpock finally! I mean I listed a lot of stuff and had a couple of people say they would buy them but it wasn’t until last month that I finally got someone to pay me. It was only a tenner but it was a tenner more than I’d had before.

Dating and socialising: This category continues to remain out of control. While it went down by one percentage point, it’s still a lot higher than I’d like it to be. I’ll spend some of my  downtime while I’m travelling trying to figure out how to rein it in and what a more realistic budget for the category should be for me.

Food: I’ve outsourced the making of one of my favourite foods / staples to a catering friend of mine. For £100, I got enough food for about 20 meals. Sure I could do it cheaper but I thought my time was worth the expense. We’ll see how long I continue to think this.

Transport: I took 3 Ubers! Yes, the shame! Transport refuses to go down into double figures like I’d love it to. I’m cycling around 60-65% of the time instead of 80-90% like I want to. Sometimes I have to go further than my weak legs can currently take me and sometimes I’m time poor but I really need to get better at this especially now that it’s still warm and generally favourable for cycling.