I set a few goals at the start of the year and felt like I’ve not been on track for most of them.  I’m a lot chubbier than is healthy or optimum, since I like to take part in a lot of sport where heft is cumbersome. I’m not eating as well as I’d like. I neither bring my own lunches in everyday nor make choices that include a high percentage of fruits, vegetables and proteins like I think I should. I’m not reading very much. I’m not spending enough time on the things that I think that I should – creating a professional brand and presence on the interwebs, learning new skills or improving the ones I want to and networking are my top goals in this aspect of my life.

A few weeks ago I was also not spending enough time with people I care about and allowed my life to be totally dominated by work and my side hustles. It was supposed to be temporary and even meant that I stopped tracking my spending in April because I didn’t have enough time to keep up. I didn’t do as much sport as I wanted. And I was so exhausted that even when I spent time with people, I couldn’t concentrate or I was cranky. Most of these things got resolved with the end of the execution phase of my side hustle project and I went on holiday for a few days at the start of the month. I also finally picked up my bike and have started cycling to work.

This post idea arose because I felt like I was ridiculously behind on my financial goals. I spent 364% more money than I intended to last week – a significant proportion of which was on dating, socialising and food. It also felt like it’s been absolutely ages since my aspirational weekly budget was anywhere close to what I actually spend.

However, I’ve just reviewed my spending since the start of the year* and this is what I’ve discovered.

It turns out that perception is actually miles away from reality 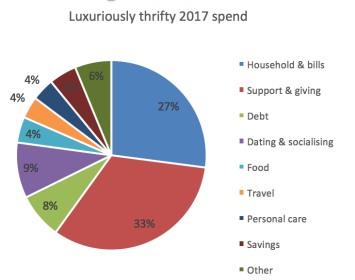 Any one who’s read this blog since I started knows that:

My whys are centered around fostering relationships (romantic, familial and at work), making some sort of difference to people, as well as seeing as much of the world as I possibly can. Since the very essence of frugality is to live a life that’s aligned with my values, it’s fair to say that I haven’t done as badly as I imagined. Looking at these in a bit more detail:

I think it’s great that I haven’t spent as badly as I thought I had but this doesn’t mean that I’m not going to make some improvements. At the end of June, I’ll review the first half of the year and decide what I need to do to make me feel better day-to-day. With a tendency to be motivated more by a carrot than a stick, there’s a strong argument against adjusting the  weekly aspirational budget upwards so that even when I go over that, I can stay within my overall budget anyway.

* I have only calculated for my spending in January through April